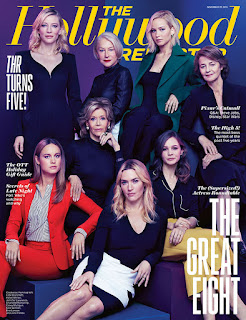 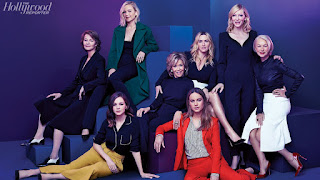 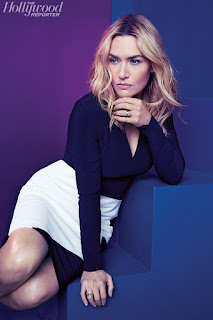 When eight of the world’s most accomplished performers gathered in one place on Nov. 14 for THR’s annual Actress Roundtable, you might have expected some backstage drama. Sure, there was a slight kerfuffle over whether their stylists should be allowed on-set, and then there was a major case of hunger pangs when new mom Carey Mulligan, 30, and newly-in-from-China Jennifer Lawrence, 25, both had to wolf down bananas before the shoot. But other than that, it was a lovefest as the two actresses joined Cate Blanchett (Carol, Truth), 46; Jane Fonda (Youth), 77; Brie Larson (Room), 26; Helen Mirren (Trumbo, Woman in Gold), 70; Charlotte Rampling (45 Years), 69; and Kate Winslet (Steve Jobs), 40, in a discussion that ranged from the pay gap between men and women to the other careers these actresses might have chosen to — yes — how to pee on film.

I’ll start with a simple question. Why do you act?

LAWRENCE: Because I have to.

MIRREN: I became an actress because I discovered the world of the imagination when I was about 14 or so and the concept that you could engage in this amazing world of storytelling. I saw a production of Hamlet, and I didn’t know Hamlet died in the end.

BLANCHETT: He does? Shit.


BLANCHETT: It’s a bit like asking why you love somebody. But for me, it’s a vocation, and in the end, I feel like I didn’t choose it. It chose me. All those out-of-work actors will probably tell me to shut up — and I’ll have to commit ritual suicide — but I’m always trying to not do it, to be honest. And then you get a call from Martin Scorsese or Todd Haynes, and you get drawn back into it.

WINSLET: It can be lonely, actually, especially when you’re younger. I remember those moments of going, “Wow, I’m doing this by myself.” And what’s interesting is: Who do you act for? I remember being asked that in a room with lots of really scary people, like Kenneth Branagh and Derek Jacobi. And everyone said a parent. Every single person.


BLANCHETT: As a way of seeking approval? It’s that whole thing, isn’t it, that actors want to be liked? And that doesn’t interest me at all. What I love about the theater is that you know who you’re acting for: your audience. And the thing I find really hard in film is, you don’t. The audience is invisible. And we’re sitting there, hoping there’s other people out there.

Jennifer, who do you act for?

LAWRENCE: My agent. (Laughter.) If I hadn’t found [acting], I would have never been able to make sense of all of these bizarre things we all had when we were kids. Why, if I think something, do I feel it? Before you’re acting, that just makes you feel crazy.

BLANCHETT: All those voices.


LAWRENCE: [Once] I con­vinced my entire bus that we were being held up for ransom because I was reading about it and I was like, “This is real.” I have an outlet, and now I understand what it is, otherwise I would have felt mentally insane. I really act for myself. I really love it. I don’t think there’s a way that you could handle these schedules, all of the actual work that goes into it, if you don’t really, really love it.

FONDA: I never wanted to be an actor. My dad was an actor, and he never brought joy home, so I didn’t view it as something that I would want to do. But I got fired as a secretary, and then I started studying, and Lee Strasberg said I was talented, so I started doing it just to earn money. And it took me a long time to learn to love it. And what I loved was telling a story. I tried to avoid making plays or films that weren’t telling a story that I felt was important. And what I discovered in the process is, it makes you more empathic because you have to enter someone else’s reality and you learn to see through many other people’s eyes.

LAWRENCE: That is what acting is.


FONDA: What’s totally terrifying is that, unlike a musician who has a musical instrument, or a painter that’s got a canvas and a brush, this is us. Our energy, our soul, our spirits. And it’s so hard because it’s so vul­nerable. You’re exposing everything.

Jane, if Strasberg hadn’t liked you, what would you have done?

FONDA: I probably would have become a landscape architect.

LARSON: Oh, I quit many times. It was too hard. So I went back to college a couple of times to be a photographer, and then an interior designer, and then, at the real depths of it, I wanted to be an animal trainer. That was like a real low point —

BLANCHETT: — for all you animal trainers out there.

LARSON: I had started acting when I was 7, and I was always wrong. I would always get to the very end [of the audition process], but I wasn’t a perfect package of one thing. I wasn’t a cliche, and it always worked against me. I wasn’t pretty enough to play the popular girl, I wasn’t mousy enough to be the mousy girl, so I never fit in. And so I’d get close, but I never got anywhere, and it was really painful. And then there was a TV show that Toni Collette was starring in, and Toni Collette was my absolute hero. And when this role came, to play a girl who was struggling with identity and who was a little bit of everything, I thought: “Oh, this is what I was supposed to do. Everything’s leading up to this moment.” I was 18. I was like, “This is it.” And I tested for it, and I didn’t get it. And I was devastated.


MULLIGAN: I remember when I did The Seagull, there’s a line Nina says: “I’m a proper actress now, and when I think about my vocation, I’m not afraid of life.” It’s a way of dealing with life.

Are you ever afraid of acting?

MULLIGAN: All the time. (Laughter.)

MIRREN: Of course, absolutely. It never stops. Younger actors say, “As you get older, as you’ve done it more, does the fear go?” Noooo. Sorry. It gets worse, actually.


LAWRENCE: I’m always terrified before every movie because I haven’t found her [the character], and I don’t get it. [Without acting, I’d have] become a nurse.

LARSON: I think you’d be a great nurse.

LAWRENCE: No, no. I’m not good with math. You don’t want me to deal with your Propofol.

WINSLET: My dad was an actor, and my older sister is an actress, and so I very much remember thinking, “Well, of course I’ll do that as well.” But I never imagined myself as an actor who would be in films. I always only thought of myself being in a play or a musical and maybe the odd episode of [U.K. ’80s TV drama] Casualty. My backup plan was to do something with children, to start a nursery school or work with underprivileged kids. And I still dream of maybe doing that in some way. I’ve always got children in my house, always.


Cate, you have four children. Does that make acting less important?

BLANCHETT: No. It just makes you really economical. All of the stuff that I frankly loved and enjoyed, all of the researching — you just don’t have time to do it. But it’s also made me more fearless because a lot of the research one does is really just a process to stave off the anxiety of doing it. It’s, “Well, I’m just going to do this shit and it’s either going to be really embarrassing or it’s going in the right direction.” You’ve got no time to be frightened.

Is it hard to find good roles?

Older means over what age?

LAWRENCE: In Hollywood or in real life? (Laughter.)


FONDA: I’m told over 40, although what I did when I was in my 40s was I simply produced my own movies because no one offered me anything. But certainly after 50 it’s hard for a woman, which is why television is such a welcoming thing.

LARSON: That’s what we’re all doing: paving the way, finding the roles that have the complication instead of the one that’s always got it together or the dedicated housewife or the wild one who smokes cigarettes and sleeps with anybody.

WINSLET: So much is made of good, strong roles for women. Actually, it’s really interesting playing vul­nerable people as well.


MULLIGAN: People always say, “You played such a strong character.” I remember someone said that to me when I played a role in Shame, and she was a suicidal mess. I said, “She’s not strong at all; she’s incredibly weak.” But “strong” to people means “real.” It means you believe that’s a person who exists, as opposed to some two-dimensional depiction of women.

Jennifer, you’ve written about the pay gap between men and women, and you’re taking a stance on issues. Has there been a backlash?

LAWRENCE: There’s always a backlash in everything that you do, but it’s not going to stop or change anything. And it’s not only an issue in Hollywood. When you’re asking about roles for men and women, men certainly have a longer shelf life. Men can play the sexy lead for 20 years longer than we can —


LARSON: But that’s just because it’s mostly dudes in charge.

BLANCHETT: It’s lazy thinking across all industries. We’re at the pointy and probably the most public end, but in what industry do women receive equal pay for equal work? I can’t think of any.

LAWRENCE: Across all fields, women are generally paid 21 percent less than men.

MIRREN: I love the way you wrote about it because you wrote about it very simply and personally. I so recognized that thing you said about, “I didn’t want to be an asshole,” you know? I want to be polite. We’ve got to stop being polite. If I ever had children, which I don’t, the first thing I’d teach a girl of mine is the words “f— off.”

FONDA: Have you [all] gotten braver? When Kate was in [Holy Smoke], it’s nighttime, and she walks out of this building stark naked and urinates on herself, you know?

WINSLET: One of my finer moments. (Laughter.)


LAWRENCE: Was it real pee?

WINSLET: No, it wasn’t real. ‘Cause you can’t piss on cue. We did actually do a pee test because I did want to do the pissing part if I could. But when you stand up and pee, it doesn’t go in a nice stream right down the center, which is what they wanted. It just races for sanctuary down one side of your leg. That didn’t work when we did the pee test, and I really did pee down my leg. So what we did is, we hung a bag of saline-drip fluid and dyed it slightly yellow. It was tied to the back of my hair on a small thread, and it just sat happily in the base of my back. And some­one activated it.

LARSON: Did you wedge it or did someone else wedge it?

WINSLET: I wedged it.

BLANCHETT: Who did that? Was that credited? (Laughter.)


Is there anything you wouldn’t do as an actress?

WINSLET: I wouldn’t be a part of anything that had acts of violence toward children. I don’t think I would do a horror film, either. That just doesn’t sit well on my soul.

WINSLET: Do you find them funny?

BLANCHETT: No, I find them scary.

LAWRENCE: I get nervous.

BLANCHETT: There’s [also] plenty of girlfriend roles out there. They’ve come my way, and many people have turned them down, and I think, “Oh maybe I could do something with this.” It’s interesting when you get those roles, which seem like nothing on the page, and you kind of subvert them. It’s hard to say no. 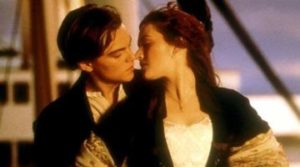